Behind the Business: One Man’s Big Dreams

“Creativity is thinking new things; innovation is doing new things,” says Ntate Mohale (as he is affectionately known at BLSA). “We are 25 years into democracy this April. And we’ve been jolted into the reality that we have committed two fundamental mistakes in our quest to be an innovative country.”

He believes the first of these has been underestimating human nature and the results of exposing people to resources for the first time. “We underestimated people’s natural capacity to not act in the interests of the broader good, but in their own interests – to amass wealth for themselves.”

The second mistake, he says, was that in the euphoria of being free politically, the legitimate skills of the struggle leaders at the time were mistaken as ones that would make them good politicians. However, excellence in negotiating CODESA 1 and 2, or the ability to assemble an AK47 assault rifle in less than three minutes, does not necessarily translate into the skills required to govern a country.

“As a result, where most economies in the world, and indeed, specific African countries, have grown their GDP, we have yet to recover from industrial-scale state capture, bribery, corruption, stealing and cheating,” he says. “Therefore, it’s little wonder that modern-day South Africa is confronted with a huge debt that is unsustainable, state-owned enterprises (SOEs) that are trading recklessly, infrastructure that is crumbling, and stubbornly high levels of unemployment that then lead to increasing levels of poverty and inequality. All indications are that we are a breath – a single breath – away from our own Arab Spring. All the elements are there – youth unemployment greater than 53%, more than 17-million people on social security and only 16-million gainfully employed, with about 5-million responsible for more than 80% of our tax revenues.”

Mohale paints a dire picture. Yet he sees a way through this turmoil and believes that business needs to play a key part in innovating – doing new things – that will drive South Africa forward. Having held leadership positions at companies including Otis Elevators, Shell South Africa and South African Airways, he is one of South Africa’s most respected businesspeople and an ardent believer in the potential of Africa. “Business, with its disproportionate voice, resources, abilities and capabilities must take a lead, in conjunction with our social partners, in ensuring we give expression to the ‘New Dawn’,” he stresses.

Bonang Mohale is CEO of Business Leadership South Africa (BLSA) and author of Lift As You Rise. He shares his thoughts on how business can help lead South Africa to success.

6 burning issues that business needs to help to address

Mohale stresses that South Africa’s problems have nothing to do with the availability of resources. “Our problems are caused by our inability to manage resources,” he says. “As General George Patton said, ‘A good plan, violently executed now, is better than a perfect plan next week.’ For us, that plan must start with ethical leadership.”

He notes that “South Africans will look back at 19 December 2017 as an inflection point in our history, when at the 54th ANC Elective Conference, we were gifted with Matamela Cyril Ramaphosa as President of the ANC.”

This, he says, was the country’s Damascus moment and one that will be remembered in the same way as Angolans recall Jonas Savimbi’s death, which ended the country’s bloody civil war.

Mohale concludes with a call for every South African to play a part in addressing the issues he has highlighted. “This is not our second, but our last chance,” he says. 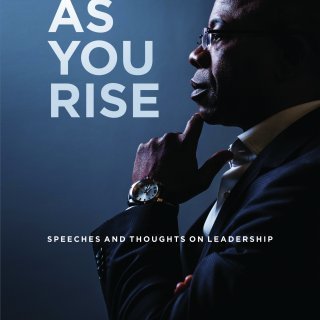 Lift As You Rise

Lift As You Rise is a compilation of Bonang Mohale’s speeches, columns, anecdotes and thoughts. It centres on the issues he is passionate about, including transformation, people development, constructive collaboration and integrity. Mohale shares how these topics came to define his career and his life. His words are complemented by contributions from others he has mentored or met on his journey.

The book retails at R270 and is available from all major book stockists, while the e-book is available on Amazon. For more information or stockists, visit the publisher’s website: traceymcdonaldpublishers.com

How to make money from your property